49 teams took advantage of the last chance event on Truman Lake, many to get an early look at the lake prior to the October Invitational, some needing another event for qualification purposes, and all to have a go at daily bragging rights.  With nearly half the field weighing a limit in a non-points event, the lake is shaping up to be phenomenal for next month’s Championship.

Lapping the field was the veteran Truman team of Doug Long and Marty Watson.   Their Sport Boats USA Key to Success was slinging spinnerbaits on steeper banks in the Osage Arm.  Going through a dozen keepers for the day, their best five pushed the scales to 19.23 pounds.  Doug and Marty added to their winning take home pay with the Sport Boats USA Highest Finishing Skeeter bonus as they fished from Doug’s FXR20 Skeeter boat.

Another veteran Truman team, Larry Wright and Doug Wallace, dropped 16.92 on the scales to secure second place.  To no one’s surprise, their fish fell to brown jigs fished in the 6-10’ range.  Included in their bag was the Ozark Chevrolet Big Bass, a stout 5.72 fall bass.

Close behind in third was yet veteran Truman team, Charley and Chris Thomas.  They reported fishing 10” worms in big trees, with their bites coming on the bottom rather than suspended in the treetops.  Their 16.41 pounds stringer came from two small spots, with considerable time between bites.

Note! The Invitational qualification list will be updated with the conclusion of the last chance event. Check the website for your status.  Sign up forms are available on the website.  Forms can be printed and mailed in or you can register online.  The invitational will be October 17-18 with 7:00am takeoffs from Bucksaw Resort & Marina.  Festivities begin Friday October 16th at noon with the Skeeter Demo Team onsite for demo rides and a chance to win $500 for taking a ride.  Don’t forget the Save a Receipt program, as someone will win a cool $1000 cash if their qualifying receipt is drawn.  Check-in/registration will begin at 3:00pm, with the meal between 4:00-6:00, followed by the pretournament meeting from 6:00-7:00.  Full details are on the website. 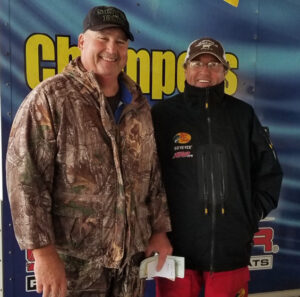 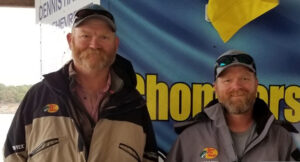 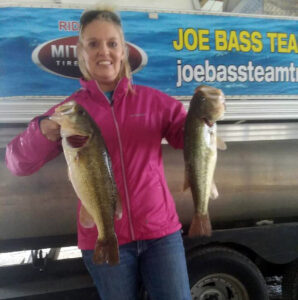