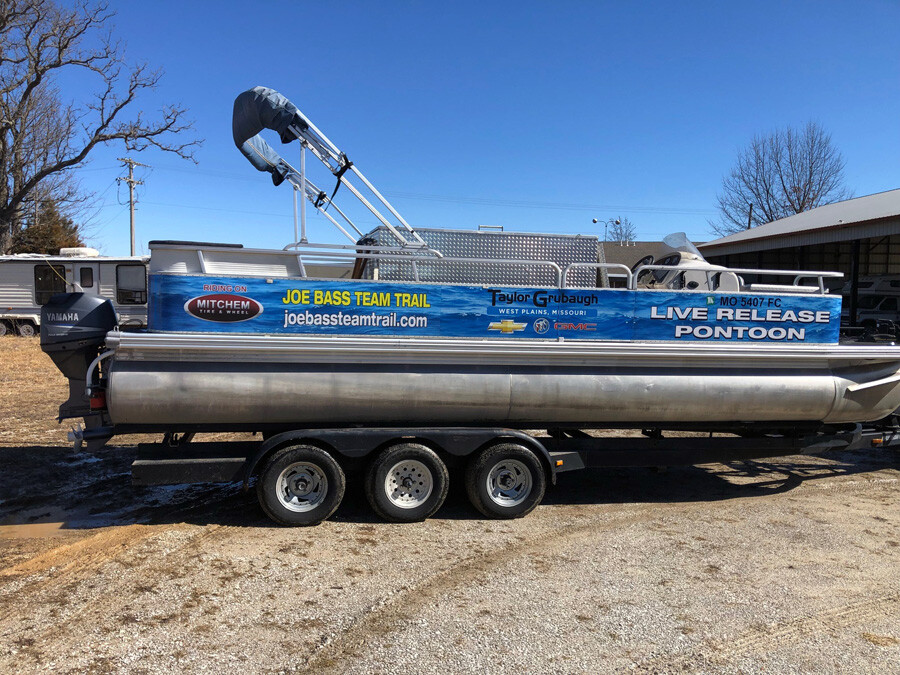 For over 15 years the Joe Bass Team Trail Live Release Boat has safely returned thousands of tournament caught bass to their home waters alive and unharmed. One of the key features of the boat is that it enables the entire day’s catch to be released at favorable locations throughout the lake, instead of being released at a weigh-in site along the shoreline.

At Joe Bass tournaments we use our own specially designed pontoon boat that releases fish following weigh-ins. The holding tank is spiked with live well treatment and is proven to replace skin slime and stop fish from bleeding. 6 aeration pumps in each tank are used to circulate the water. The boat helps recover and re-distribute tournament-caught bass to different locations around the lake after a weigh-in. The tank sections are individually plumbed for filling and contain individual diffusers, which provide oxygen from a compressed oxygen cylinder. To reduce damage to the fish, a trap door located on the bottom of the holding tank is opened that releases the fish directly back into the lake with no human handling.

Bass movement studies show that tournament-caught bass may take a few months to move away from their release site. This behavior could cause potential problems if forage and habitat are limited in the release area. Disease issues, such as Largemouth Bass Virus, also are a concern if bass remain crowded in a small area.

JOE BASS TEAM TRAIL MISSION: To provide a series of creditable, affordable, professionally ran bass tournaments where every attempt is made to protect the resource, promote sportsmanship throughout the membership, recognize and promote sponsor products, and give consideration to each individual anglers needs.